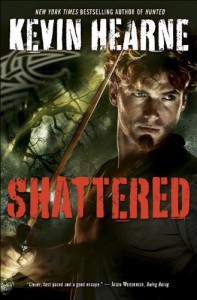 For nearly two thousand years, there was only one Druid left walking the Earth—Atticus O’Sullivan, the Iron Druid, whose sharp wit and sharp sword kept him alive while pursued by a pantheon of hostile deities. Now he’s got company. Atticus’s apprentice Granuaile is at last a full Druid herself. What’s more, Atticus has defrosted an archdruid long ago frozen in time, a father figure (of sorts) who now goes by the modern equivalent of his old Irish name: Owen Kennedy. And Owen has some catching up to do. Atticus takes pleasure in the role reversal, as the student is now the teacher. Between busting Atticus’s chops and trying to fathom a cell phone, Owen must also learn English. For Atticus, the jury’s still out on whether the wily old coot will be an asset in the epic battle with Norse god Loki—or merely a pain in the arse. But Atticus isn’t the only one with daddy issues. Granuaile faces a great challenge: to exorcise a sorcerer’s spirit that is possessing her father in India. Even with the help of the witch Laksha, Granuaile may be facing a crushing defeat. As the trio of Druids deals with pestilence-spreading demons, bacon-loving yeti, fierce flying foxes, and frenzied Fae, they’re hoping that this time . . . three’s a charm.

What I didn't like was that Granuaille and Atticus weren't together, which equals romantically boring, but we saw Owen and Greta get their freak on instead lol . Owen is Atticus' mentor who was frozen in time for over 2,000 years, and Greta is a werewolf who travels with Hal Hauks pack and holds a grudge against Atticus.

I couldn't figure out the first person narrative of each chapter until I realized I had to pay attention to the picture that describes who it might be. jeesh. The chapters alternated points of view from Owen, Atticus and Granuaille.

I like snow and the Yeti, and the part that stood out the most, which I found interesting, was when Granuaille asked the Yeti to tell her about snow.

"Snow is the form to which all water aspires, for only as snow is it unique and at rest," and "Vapor is distant and water cuts away at the earth, but snow is the blanket that protects us."