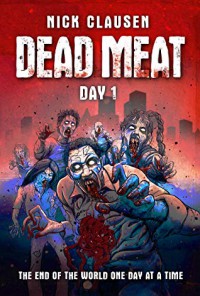 The end of the world one day at a time.
In this new apocalyptic zombie series from the author of They Come at Night and Human Flesh, we follow events day by day as the world slowly but surely descends into mayhem as the zombies take over. Don't miss the thrilling ride! For fans of The Walking Dead, The Orphans Book and World War Z. How it all began Three teenagers find themselves trapped in a stuffy, warm basement. The old lady who used to own the house is now dead. She's also standing right on the other side of the basement door, scraping and moaning, trying to get in. Patiently. Tirelessly. How did they end up here? Just a few hours ago, all three of them were sitting in Thomas' car, sweating and listening to music, not a care in the world. They were almost done with the paper route when they came to the old lady's house. And that's when everything turned to chaos.

***I was provided with a free copy by the author in exchange for a review.

Dead Meat: Day 1 is the first book in the Zombie apocalypse.

The Following takes place on Saturday, July 26 somewhere in Denmark.
When Thomas, Dan and his sister Jennie arrive at the end of their paper route, the furthest thing on their minds was being eaten by zombies. The weather was hot that day and they were all thirsty but are themselves trapped in a basement hiding from a family of Zombies inside the old dilapidated farmhouse. I don't think they were very brave or smart enough to know how to kill zombies because they were scared. Jennie thought she scraped herself on some glass but she was scratched by the zombie's long nails. They knew she was infected when they realized her symptoms were getting worse. She had a burning fever and it was inevitable she would die and turn. It didn't take long either.

Thomas and Dan had been planning their escape when Jennie reanimated into a zombie. They never killed her only kept her a safe distance from attacking them.

For Thomas and Dan, it was an ordeal to finally be out of that house. Evidently only 3 zombies were inside: the father, the grandma and a child. Yet Thomas managed to free himself. He also had to rescue Dan. They also realized someone alive was hiding in a car but she didn't have the car keys. She told Thomas they were in her husband's pant pocket. *facepalm*

Thomas and Dan locked themselves inside their car and drank a whole case of warm pop. The car wouldn't start and wouldn't you know it. Only then Thomas remembered the glass that he cut his foot on had zombie blood on it. So now he was also infected and burning with fever. Before he died he desperately wanted Dan and the lady of the other car to get out and get help. There were two zombies smashed against the car so Thomas got the key out of the husbands pocket and killed them before he passed out.

The lady of the car and Dan got away and made it to the hospital only to find out Dan had stuck Thomas's body in the trunk. Ugh. Why?

Realizing it was a bad idea to have taken Thomas' body to the hospital, Dan could have caused a zombie outbreak. So, they high tail it out of there and come to an abandoned area where they could set the damn body and the car on fire. Now that all of the zombies were dead was everything back to normal again? No! Dan remembers Jennie! They never killed her and he just hoped when he got out he secured the basement window ... to be continued.