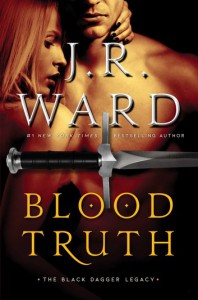 I love this series! Blood Truth is about how Boone and Helania meet and fall HEA. Helania is not perfect. I thought she was way more fragile than the other females in the Black Dagger Legacy. I mean even though she knows how to handle a gun, her reclusive and anti-social tendencies bothered me. By the end, it appears she had grown up a lot. As a child, before her transition, she struggled with blindness and was bullied for it. Her parents died when she was young as well.

When Helania learns her sister was murdered she distracts herself by making it her priority to find the killer. One night when Helania is at the Pyre's Revyval club, she discovers a female body dead in the basement hung up by a meat hook. This time she calls the Black Dagger Brotherhood. Guess who shows up? Butch and Boone.

Butch O'Neal used to be a detective so it's fun to see him back at it again. He asks Boone to help him with the female murder investigations which might be due to a serial killer in Caldwell New York.

Boone was intended to an arranged marriage with his friend Rochelle. His father was angry that they broke their engagement off but in the wake of the news of his father's death and perhaps blaming himself for it, Boone receives some more bad news in a meeting of the will. His father left everything he owns to Marquist without a mention of his son. You would think he'd be a bit pissed off but he accepts it and if it weren't for the King Wraths orders, that he be allowed a couple of weeks to think about what his next move is, Boone would be homeless.
But Boone feels trapped in a hateful relationship with the family butler so I guess he would be happier to leave.
It understandably makes his home life unbearable.

After the death of his sire, secrets were revealed and rumour is that Altamere and Marquist loved each other. He is rewarded for his service exponentially even though he is a swivelling scoundrel and that is putting it mildly.

The connection to who Rochelle's 'boyfriend' is and who Isobel's friend was is uncovered gracefully so thank you Ms. Ward, but MORE EVIL secrets are hidden underneath individual flesh.
I am more intrigued by Syn.

We also get to see in-depth full coverage of a vampire female in their needing period. Helania experiences intense sexual cravings and suffers extreme pain. She is very susceptible to getting pregnant especially because Boone had been staying with her when it happened. You can imagine they had to stay clear of one another. Anyway, I just thought I'd mention that TMI? *shrugs