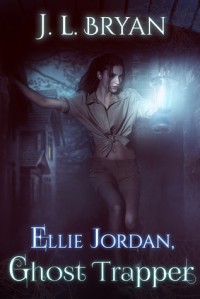 I loved J.L Bryan's ghosts and Ellie Jordan's character! Some ghosts are bad but others are only trying to help, like Mercy. The ghosts in this story are trapped in a house called The Marsh House. It is a creepy dark mansion that was sold to a family with dreams of turning it into a bed and breakfast or possibly a hotel. However, they quickly find out it is haunted when strange things begin to happen.

The father is a drunken slob who refuses to believe there is a ghost in their house and his daughter Lexie is traumatized by having seen one.

It is the ghost of Mercy Cutledge, which we know, is only trying to warn them by telling them to leave because there is a dangerous evil inside the walls.

Her mother Anna Treadwell is the only sensible one who reaches out to Ellie Jordan for help.

Ellie Jordan has to get rid of the ghost of Mercy Cutledge, so they perform a couple things, like stage a funeral, but it doesn't work, so now, Ellie is forced to evict her. Before that happens, she gathers more facts about the owners of that particular house. I found the research fascinating. Ellie and her partner Stacey also break into the same loonie bin asylum her ghost lived in but was long since shut down and abandoned. That part gave me the creeps. They didn't have a machete but wore boots and waded in tangled vines, smashed glass and tall weeds in a thorny jungle.  I can picture them both running like a bat out of hell out of that decrepit place. Good times.

After doing some research, she finds out the owner used to be Augustus March born 1848 and had amassed a lot of money. He marries Eugenia who was a good church-going woman, but she develops a strange sudden illness and died in 1901. It was suspicious.

Augustus has a bad reputation and a few years later his house is turned into a high-class brothel or some shit like that. I can't remember if he did it himself or if it was his niece Louisa Marsh (?). Augustus left his house to her, which by the end of his life was about all he had left.

He was stabbed to death in 1954 by Mercy Cutledge and everyone assumes she was crazy. She accuses Mr. Marsh of being an "occult wizard who is in league with demons" She was sent to an asylum aka mental hospital but later was murdered in Mr. Marsh's house.

Anyway, the writing is good. I was afraid when Ellie began discussing how some ghosts can actually hurt us, that I would start hearing and seeing ghosts and didn't want them to hurt me ~ Lol I felt like crawling under my blanket with the classic case of the shivers. Like Scooby-Doo!

I am looking forward to reading more in the series. I am already attached to the characters. So fun.